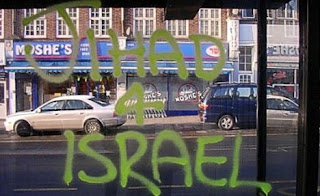 As Israel continues to do what is necessary to protect their country, Muslims across the world are taking upon themselves to start their own litte religious wars across the world. As Jews in Denmark, the UK, France, and the USA have been attacked.

Their leaders have compiled a dossier of attacks against Jews which will be handed to seniors officers in the Metropolitan police.

The attacks include claims of:

An attempt to burn down a synagogue in north-west London.
An assault on a Jewish motorist who was pulled from his car and punched.
A gang of youths chanting anti-Semitic slogans as they tried to enter restaurants and shops in Golders Green.

The Community Security Trust, which is responsible for the safety of Jews in Britain, has also noted the emergence of anti-Semitic graffiti in Jewish areas across London.

Slogans sprayed on walls include: 'Kill Jews' and 'Jews are scumbags.'

The trust has now logged 24 anti-Semitic incidents - most of them in London - in the past week. Police are said to be stepping up patrols in Jewish areas.

Mark Gardner, the trust's spokesman, told the Standard: 'There has been a significant rise in the number of anti-Semitic incidents, especially when compared with what is usually a very quiet time of year for racist, anti-Jewish attacks.

'It is a pattern with which we and police are now sadly familiar, whereby hysteria is whipped up against Israel: and British Jews then suffer a wave of anti-Semitism.'

The arson attack on the synagogue in Brondesbury took place on Sunday night. The arsonists first tried to smash open a window but failed because of the toughened glass in place to protect such buildings from terrorist attacks.

Mr Gardner said: 'Having been thwarted they then appear to have attempted to set the front door alight with petrol, causing some damage to the exterior of the premises. Police, CST and fire brigade attended the scene.'

On New Year's Eve, a man was pulled from his car just as he was about to drive off and assaulted by three men whom he described as being of Arab appearance.

The victim did not suffer any serious injury. The same night a gang of youths alarmed locals in Golders Green by trying to enter Jewish shops while chanting anti-Israeli slogans.

Joey Ben-Yoav, manager of nearby Met Su Yan, a kosher Chinese restaurant in Golders Green, said: "It was scary. They were waving flags and shouting. It felt like if we went out they would hit us or something.

'They walked past a few Jews and just shouted 'Jew' at them. They did not look like they were in the mood for making peace.'

Link to Article
Posted by Christopher Logan at 4:40 PM

There are signs, by the railway station were Muslims pass through of anti Jewish protesting and chanting, with graffiti
on the walls.
There is also evidence of attacks.

Thanks for the updates from the UK.

Do you agree that we are in the beginning stages of a world war?

Well Chris, all the Wal-Marts around in a 25 mile area to me are sold out of all large calibre ammo. What does that say? Thank God I live in the South. We don't put up with things as you've described around here. That stuff would definitely make the person doing it have sudden sharp pains in their butt.

The USA is also probably going to start feeling more involved in a very real way.
Intelligence sources are picking up INTERNET chatter amounting to a call to attack Jewish Children here in the US.
See http://www.homelandsecurityus.com/20090106DJH

Be vigilant, any suspicious activity should be reported immediately to your local law enforcement agency.

We can NOT ALLOW this to happen here.

Thanks for the update Munz. Our government has allowed our enemies into our backyard.

I could not say if i think a world war, it could if things got out of hand. But i do think a civil war or at the very least race riots will come to the UK soon.It is at boiling point here.
In the end, at the end of the day, it will be either our way, the way of the west or the way of Islam and there is no doubt about that. There is also little doubt who would win, but t have the enemy within as we have will be a situation that we have never had before.It seems to be all coming to ahead. Let us hope Obama is up to it, personally i doubt it. We shall see.

There have been a lot of warnings in the past years that would indicate a third world war was coming, attacking of western interests abroad, bombing embassies, hostages, hi jacking of planes and more recent suicide bombings, it would all indicate that a war is on the way, but how soon it is not possible to say.
Public unrest may trigger the need to do something, or a great outrage, or repeated outrages in the west, particularly on western soil, i think you would need to look to that sort of thing for an indication war has begun. Or war is immediate. The word war has been used over and over by Muslims and also by western leaders.

They'd better hope they don't start something close to my home, because Texans don't put up with messin' with our people. That's not a threat, it's just the way it is. If others think it's ok to commit violence, and we're just going to sit here and take it, they can just think again. Stupid angry violent people. They don't have a corner market on it though. There are a lot of angry people right in this country itchin' to respond, I'm sure.