Canada:Sunni vs. Shiite Fight Breaks out 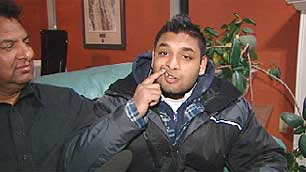 Hat tip to The Religion of Peace

Hockey player says Burnaby fight was religiously motivated
January 26, 2009
CBC News
Izaiah Buksh is suffering from bruises and will need to undergo a root canal after what he says was a religiously charged fight that broke out at a ball hockey tournament in Burnaby, B.C., on Sunday.

The 20-year-old, who was playing in the B.C. Muslim Sports Association-sponsored event, said he was warned not to play in the tournament because, though he's a Muslim, he is not a Sunni.

The mood of the game turned tense early on when his team took an early lead. Buksh said the opposing team, made up of Sunni Muslims, told him, "You guys shouldn't even be here. You're not Muslim."

Violence ultimately escalated after a play where the opposing goalie swung his stick at Buksh.

Buksh said he went to tell the referee, and when he turned around, he was attacked by a player.

That's when the fight broke out.

"Another player on my team came in and then my dad and the coach came in. At the end, it was most of the gym to three or four guys," Buksh recounted.

He estimates his group was outnumbered about 10 to one.

Buksh's father, Ahmed, said he feared for his son's safety.

"It was basically a riot by that time and swarming — one of my sons fell down."

The B.C. Muslim Sports Association said it will issue sanctions against some players. It contends, though, that the sanctions are purely sports-related and that the incident was not religiously motivated.

Link to Article
Posted by Christopher Logan at 11:41 AM

Just more problems that Muslims bring to us.

Who is surprised by this? Expect more of the same as multiculturalism goes full tilt.

MC/PC is brainwashing. Pass it on!

We will certainly see more of this.

Weekends to peopleig2tmean that they can have a two-day wowgold4europe good rest. For example， people gameusdcan go out to enjoy themselves or get meinwowgoldtogether with relatives and friends to talk with each storeingameother or watch interesting video tapes with the speebiewhole family.
Everyone spends agamegoldweekends in his ownmmoflyway. Within two days,some people can relax themselves by listening to music， reading novels，or watchingogeworld films. Others perhaps are more active by playing basketball，wimming ormmorpgvipdancing. Different people have different gamesavorrelaxations.
I often spend weekends withoggsalemy family or my friends. Sometimes my parents take me on a visit to their old friends. Sometimesgamersell I go to the library to study or borrow some books tommovirtexgain much knowledge. I also go to see various exhibition to broadenrpg tradermy vision. An excursion to seashore or mountain resorts is my favorite way of spending weekends. Weekends are always enjoyable for me.