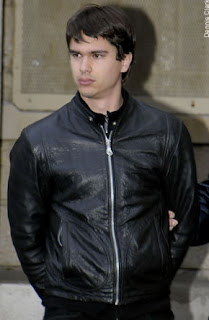 Long Island waiter Stephen Buttafuoco who was working at a Jewish wedding, took it upon himself to give the marrying couple a gift that they will never forget. He played a recording of a recent pro-Palestinian rally with the chants of "Allah Akbar" over the loudspeakers for all 700 guests to hear, shocking the entire crowd. I had read in another article that the waiter is considering converting to Islam. He will make a great Islamist.

Hat tip to The Munz

Long Island waiter rebelling against his pastor father terrorized guests at a Jewish wedding reception, blasting a recording of a pro-Palestinian rally that included Arabic chants through the DJ's microphone, authorities said today.

Stephen Buttafuoco, 23, was charged with a aggravated harassment as a hate crime for allegedly blaring "Allahu akbar," Arabic for "God is great" - scaring the over 700 wedding guests who were wrapping up the party at the Woodbury Jewish Center around 1 a.m. Jan. 4., Nassau cops said.

Buttafuoco, who was arrested Friday and is not related to the infamous Long Island lothario Joey Buttafuoco, allegedly "admitted he did this with the intent of disrespecting the [Jewish] religion," according to court papers.

He was arraigned today in Nassau County District Court and released on $1,500 bail.

"He did a foolish and impulsive act," Spreer claimed. "He's not a radical. He didn't even know they were on the air. He feels absolutely horrendous."

The Queens College creative-arts student had been at a pro-Palestinian rally in Manhattan a day before the wedding, and made a recording of the chant on his cellphone.

Buttafuoco thought he was just playing it for a friend, and didn't realize it would be blared to the whole reception, his lawyer said.

Morrell Caterers, which handles weddings in three temples across Long Island, including the Woodbury Jewish Center, said they fired Buttafuoco on the spot.

"We took appropriate action. We fired the gentleman in question and we called the police," said co-owner Scott Morrell, who declined to say when police were called.

Spreer said his client was no anti-Semite, and has worked for Morrell Caterers for about two years without any problem.

"He was just quietly rebelling against his dad," Spreer said.

Dan Buttafuoco is an ex-Marine who serves as a minister at the Gateway Life Center, a Pentecostal church in Babylon, LI, and an Israel supporter.

"He was just fooling around with his friend. He didn't realize it was being echoed around the whole building," the devastated dad said outside his Suffolk County home today.

"We have nothing against any other religious background, especially the Jewish people. We love them."

The family wants to make amends to the Jewish community, Spreer said.

"They want to reach out . . . and try to rectify the situation," the lawyer said.

The incident has mortified Stephen Buttafuoco's parents, his father said.

Link to Article
Posted by Christopher Logan at 2:24 PM

Too bad they didn't kick his bigoted butt. What an asshat!!!

He's just living up to the Buttafucco name.

i was at this wedding and all i have to say is this kid although maybe not a terrorist brought fear for a lot of people who were close to the bride and/or groom. its not a matter of freedom of speech or anything just a stupid act.