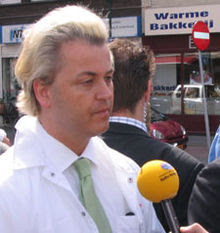 Back in April of 2008 a district court in The Hague ruled that anti-Islamic European politician Geert Wilders did not break the law by comparing Islam with Fascism and calling the Koran the Islamic version of Hitler's Mein Kampf. Since then Islamic groups have not stopped pushing to get this decision reversed and they have finally succeeded. Islamists know that if we cannot even name our enemy we cannot defeat it.

The Associated Press Published: January 21, 2009
THE HAGUE, Netherlands: A right-wing lawmaker should be prosecuted for inciting racial hatred with anti-Islamic statements that include calling the Quran a "fascist book," a Dutch court ruled Wednesday.

Freedom Party leader Geert Wilders made headlines around the world in March 2008 with his film "Fitna," which juxtaposed Quranic verses against a background of violent film clips and images of terrorism by Islamic radicals.

In 2007, Wilders called for a ban on the Quran "the same way we ban 'Mein Kampf.'" He said both Adolf Hitler's work and the Muslim holy book contain passages that contradict Western values.

The Amsterdam Appeals Court called Wilders' statements in his film, newspaper articles and media interviews "one-sided generalizations ... which can amount to inciting hatred."

The court's ruling reverses a decision last year by the public prosecutor's office , which said Wilders' film and interviews were painful for Muslims but not criminal.

Wilders told Dutch media it was a "black day for myself and for freedom of speech."

The decision set the stage for what will likely be a highly charged trial touching on the declining Dutch tolerance toward a large immigrant population from Muslim countries, mainly Morocco and Turkey. Dutch attitudes shifted markedly after the 2004murder of filmmaker Theo van Gogh by a radical Dutch Muslim.

Wilders, whose party has nine lawmakers in the 120-seat lower house of Dutch Parliament, has built his popularity largely on tapping into fear and resentment among Dutch voters of Muslim immigrants.

The three judges said they had weighed Wilders' anti-Islamic rhetoric against his right to free speech, and ruled he had even gone beyond the normal leeway given to politicians.

Because Wilders has not yet been charged, it is not clear what maximum penalty he could face if convicted.

While judges in the Netherlands generally are loathe to become involved in public debate, the court said it was making an exception in the case of Wilders' comments about Islam.

"The court considers this so insulting for Muslims that it is in the public interest to prosecute Wilders," a summary of the court's decision said.

"This is a happy day for all followers of Islam who do not want to be tossed on the garbage dump of Naziism," Spong told reporters in Amsterdam.

Link to Article
Posted by Christopher Logan at 6:25 AM

Europe no longer deserves the title of civilized. Islam is here to make us all barbarians, and we must all celebrate this wonderful barbarism!

I work fore freedom. So when comes the police. I don´t stop whit mine page mohammedt-shirt.com. This is Not mine Europe.Islam is the end of freedom of speech. So fuck islam and the false prophet.

Anonymous, as they say in Detroit, "I second that emotion". When the Europeens really start beating the crap out of every muz they find in the street, I'll believe you. If I lived in Europe, I'd carry a baseball bat everywhere I go....just in case opportunity arises.

Well if I lived in Europe, I would be looking to get out. but where? The muslims are infiltrating and intimidating infidel civilizations everywhere. You must not criticize those who want to enslave you. That would be offensive!

So true John!! It is easy to grow for them. They will live in dirtiest places (or make the clean place dirty) and exploit women. The religion Islam can be compared to Warren Jeff's territory.

Why are these scoundrels not being punished???

Sad, sad report. Prosecute Wilders because Muslims are offended? This is happening all over Canada.

Hi Maggie,
But Muslims are free to say what ever they want.

This is a travesty and it's happening right before our very eyes.

Gee...and all Geert did was call attention to facts (here, about Christians):

[5:14] Also from those who said, "We are Christian," we took their covenant. But they disregarded some of the commandments given to them. Consequently, we condemned them to animosity and hatred among themselves, until the Day of Resurrection. GOD will then inform them of everything they had done.

[5:33] The just retribution for those who fight GOD and His messenger, and commit horrendous crimes, is to be killed, or crucified, or to have their hands and feet cut off on alternate sides, or to be banished from the land. This is to humiliate them in this life, then they suffer a far worse retribution in the Hereafter.

Hitler was wrong cause he picked the wrong people....but there weren't muz infestations back then. He probably would have ignored the Jews and gone after the muz had there been muz in Europe. I'd have volunteered to help. I really don't think they are of any use whatsoever ......maybe target practice. Oh crap, is that un-politically-correct or offensive to tender muz feelings? Too frickin' bad!

As many sane people know, Geert Wilders is NO racist. He is simply against out-of-control immigration; and against immigrants who won't assimilate; and the ones who beat Gays and rape non-Muslim women for not being covered up.
He is also very much against the ones who kill their own daughters and sisters for their 'family honor'.
.
here's an absurd thought -
your Supreme God knows
Christ was a pedophile

and a raping terrorist
converting slaves by the sword
.
Muslims are not a 'race' anyway, they are followers of a religion/ideology and its Sharia Law.
Most Muslims aren't even Arabs, which by the way, is also not a 'Race'.

But their duty is, according to their Koran, to spread Sharia law over the whole Earth. It might take 100-200 years, if they succeed.

We all should read the Koran, but be careful, for the Koran prohibits non-Muslims from reading it.
I wonder why.

This is BIG, this is REAL BIG! SPREAD THE WORD to the world everyone! The EU Mandarins have crossed the line! If this goes to court, how much more of the public will become aware of this tyranny?
All real freedom starts with freedom of speech. If there is no freedom of speech, then there can be no real freedom.

The Christians and Jews don’t riot when somebody makes fun of Christ or Jews. People must learn to be civilized, and held to account when they are not. Muslims included.
Geert Wilders is a hero spreading the painful truth. He MUST be protected!
.
here's an absurd thought -
your Supreme God says
Christians are a race

who love the Jewish race
and the peaceful Buddhist race

.
absurd thought -
God of the Universe wants
Islam for everyone

.
absurd thought -
God of the Universe says
decide to change your race