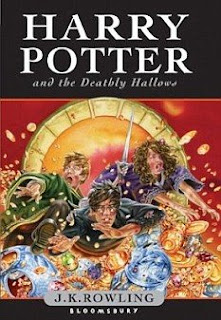 Each day we see more and more evidence of how this whole multiculturalism experiment is just a failure. Now we have Islamic schools in the UK teaching Muslim children to hate Western culture. One Islamic school has even stated that Western culture is the opposite of almost everything that Islam stands for. For once I agree with them, their culture and their "religion" should of never been allowed into the West in the first place. It is rotting us away from within.

An investigation by the Civitas social policy think-tank found websites of some of the UK’s 166 Muslim schools are spreading extreme teachings, while a handful had links to sites promoting jihad, or holy war.

The Civitas report, entitled Music, Chess and Other Sins, claims Ofsted inspectors are incapable of scrutinising Muslim faith schools properly, and demands an inquiry by MPs.

Many of the websites featured in the report were shut down or edited in the hours before it was published.
Islamic schools educate thousands of Muslim children. Most operate in the private sector although increasing numbers are seeking state funding.

The study, overseen by Dr Denis MacEoin, a university lecturer in Islamic studies, looked at material found on Islamic schools’ websites, either content or via links.

Examples include the website of the Madani Girls’ School in East London which stated: ‘Our children are exposed to a culture that is in opposition with almost everything Islam stands for.

‘If we oppose the lifestyle of the West then it does not seem sensible that the teachers and the system which represents that lifestyle should educate our children.’ 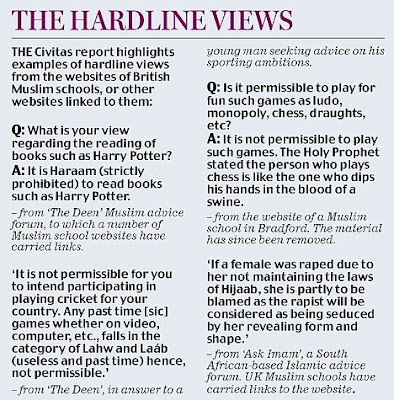 The website comments have since been edited and parts deleted.

Dr MacEoin stressed that the problems were not found in all Muslim schools, but said some were instilling a disturbing ‘ghetto mentality’.

The Association of Muslim Schools condemned the study as ‘misleading, intolerant and divisive’, claiming it was ‘based on prejudices rather than evidence’.

A spokesman said: ‘Muslim schools provide an outstanding standard of education. Ex-pupils have developed into exemplary citizens and participate in all aspects of civic society.’

The Department for Children, Schools and Families said it was investigating the claims and would treat seriously any failure by state-funded schools to ‘promote community cohesion’.

Link to Article
Posted by Christopher Logan at 9:30 PM

They don't want the state to teach their children and that is fine. But then if they reject the state's help in education, the state should reject the financial responsibility to fund them.

My country should reject them all together. They are nothing but trouble. From threats, to lawsuits, to imposing to sharia.

They can't play games, it require brain and 'get along' with the friends.

Well done!
I am very grateful for the info on your blog.
Great posting. Very informative too.

6 Yard Skip is very popular among the builders of the United Kingdom. Generally builders use this skip and six cubic yard skip is also known as builders skip. The most common contributors of land pollution are industrial waste and domestic waste. It is very important to discard waste effectively to ensure the minimization of pollution.