Here are some pictures from this week's Rally for Rifqa, that were sent in by Pastor Jones of the Dove World Outreach Center.

COLUMBUS, Ohio—Dozens of Christian activists descended on Columbus Monday morning to rally in the name of Rifqa Barry, the central Ohio teenager who converted from Islam to Christianity. Bary fled to Florida during the summer, saying she feared her father would kill her because of her conversion.

Bary is now back in Ohio under foster care. Her case is moving through the legal system. A hearing scheduled for Monday was postponed until December 22.

Rally-goers said they are worried about Bary’s safety if she is returned to her parents.

“There is the larger question of, ‘Is Aamerica going to protect religious freedom at this time and allow this girl to make a choice in conscience to be a Christian, rather than a Muslim,“ asked Robert Spencer, a co-organizer of the rally.

A group of Christian activists that traveled to Columbus from Florida wore t-shirts criticizing the Islamic religion. Bary’s parents hope to regain custody.

Investigators in both Ohio and Florida have not found a credible threat to Rifqa Bary’s safety.


The group with the "Islam is of the Devil" shirts, is from the Dove World Outreach Center. 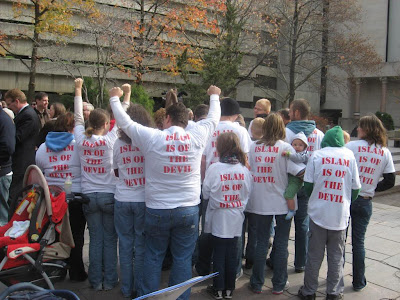 Great work guys!
Posted by Christopher Logan at 10:22 AM

As to which more appropriate oneself, water like the person, changes in temperature from cicada.

Quite useful material, thanks so much for the post.

Wow, there is really much useful data here!

leased as a professional salon straightener. After gaining popularity superslot

Thanks for sharing awesome blog post, I read the whole stuff. To get more info about pharma consulting services, visit https://www.onfeetnation.com/profiles/blogs/market-your-medical-device-after-getting-fda-clearance.

I Saw Your Website Carefully. Thanks For Create Such Kind of Informative Website. Your All Content Is Relevant To Your Subject. I Say Keep It Continue. As the article on the site RootsAnalysis you can check the report teleradiology services market