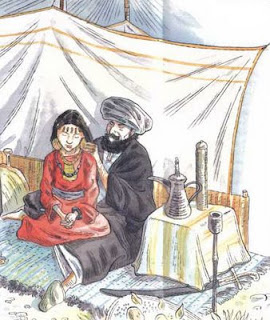 In NYC we have converts to Islam that spread their hatred every week on the streets of the city. Now once again we see how Islam destroys societies from within, as this Muslim convert married a 14 year-old girl in an Islamic ritual. Islamic laws contradict our laws and it should of never been allowed to be practiced here in the first place.

Vincent Mosby signed a marriage contract and paid a dowry in a religious ceremony in August, police said.

Mosby, 23, of Kansas City didn’t legally wed his 14-year-old bride, however, because Missouri law won’t allow it without a judge’s order. Police said she was pressured into the union because her mother and stepfather thought she was going to be sexually active with a boy her age.

A relative told police that Mosby called and threatened violence if family members didn’t “give me back my wife in 72 hours,” according to court records. Two days later, on Sept. 9, someone fired three shots into the Kansas City home of the girl’s aunt. No one was hit.

Police arrested Mosby on Saturday for his alleged sexual relationship with the teenager. Jackson County prosecutors on Sunday filed one count of statutory rape. A judge set a $100,000 cash-only bond.

Police said the girl’s stepfather and mother became concerned that she was going to become sexually active, so the stepfather allegedly approached Mosby about marrying the girl. The girl was “strongly encouraged” to wed Mosby, police said.

The stepfather, Mosby and the teen had several “sit downs” before the stepfather arranged for a religious ceremony on Aug. 4 at her home, not far from the stepfather’s mosque.

Two members of the mosque attended, but the bride “was not allowed to be present,” court records said. She waited in her room upstairs. Her stepfather allegedly came upstairs after the ceremony, which consisted of prayers and a contract signing, to announce that she was married.

Police say they have the “marriage contract” with the signatures of Mosby, the girl and the stepfather.

The contract also notes the dowry the girl requested from Mosby — a watch and ring, which he told police he bought at Wal-Mart.

Court records said the couple had sex three times in August in her home, while her mother and stepfather were home. The girl did not move in with Mosby. She stayed with her parents and kept in touch with Mosby through phone calls and text messages.

In Islam, boys and girls are considered adults based on when they hit puberty, and people in some parts of the world do marry young, said Mahnaz Shabbir of Stilwell, a past president of the Heartland Muslim Council.


Link to Article
Posted by Christopher Logan at 2:38 PM

This is just ridiculous! Are we going to put our legal system at risk in America OUT OF POLITICAL CORRECTNESS? And what RACE are these so-called "Muslim converts"? Vincent Mosby... ONE GUESS! What's his new Islamic name?! "Mohammed Khan Ali" or some such nonsense? How long is the guy's rap sheet? Americans, WAKE UP! Our country is being destroyed by PC-insanity!

It just blows me away that these ass holes come here and when they learn that our customs are not theirs, they get all weird and do some stupid crap like this, of course, thinking that they won't get caught or that we will change our customs to accommodate theirs. If they like their backward way, they can take their asses back to where they came from. Hopefully THAT will be backward enough for them.

The classic manual of Islamic Sharia Law has been published in English under the title "Reliance of the Traveler." It has over 50 pages of requirements for an Islamic marriage -- only a few of which were actually met by this one.

Since Muhammad married Aishia at age 6 and consummated the marriage when she was nine (and still playing with dolls), this sets the precedence for Islamic marriages. Also, in Islam a woman is considered the property of a male guardian. Muhammad, in his final sermon to his followers, said, "Treat women well, for they are like domestic animals with you and do not possess anything for themselves." (Al Tabari's History, para. 1755) So a woman is a possession of the father until she is married, and then she becomes the possession of the husband. The wedding ceremony, then, is a formalization of the transfer of property. There is no need for the "bride" to be present, as was pointed out in the article. The marriage is an offer by the guardian, "I marry you to her," and an acceptance by the groom, "I accept her marriage." The concept of "love" is not mentioned in Islamic law, as far as I know. The Arabic word for marriage -- nikah -- is actually the word for the sexual act.

Americans are getting nikahed every day by these attempts to make the barbaric Islamic practices normal in our society.

Even more alarming than having Muslim foreigners arrive in U.S. and insist on all their customs being normalized here are the so-called CONVERSIONS TO ISLAM that are occurring inside U.S. PRISONS: An ordinary ghetto-thug or murderer or rapist goes in and later is "converted" by someone like H. Rap Brown (who now goes by a fancy Arabic handle). Eventually, many of these so-called "converts" who suddenly "got religion" are released back into society to work their evils, chief of which is invariably the OVERTHROW of America! WHY are Americans so DENSE about all this? WAKE UP and see what's happening, folks!

Shouldn't this scumbag be arrested as a pedophile? This should not be tolerated in America. They arrested the Mormons in Texas for having underage "wives", so why is this allowed? We know the answer to that, this pedophile is a member of a protected minority, islam. I've had enough of political correctness or is it fear, which is allowing a muslim subculture, with their own sharia rules, to develop throughout the west.

Okay, he has been charged with statutory rape. I didn't notice the title of the article before.

It merely blows us apart the bumm openings arrivegw2 gold here so when these people discover that the methods are certainly not their own, they find almost all unusual and perform a little dumb rubbish this way, certainly, believing that they will not find trapped or perhaps that any of us can change the traditions to match their own. When they as their backward technique, they're able to take their test to where many people got their start in.Diablo 3 items Hopefully That is to be backward ample on their behalf.