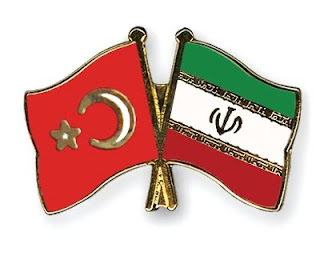 While non-Muslims are arguing amongst ourselves over if there really is an Islamic threat, Iran with their hard line cabinet, and the anti-Israel Turkish government, are joining hands in unity. Hopefully we will figure this all out before it is too late.

Iran and Turkey are expected to take their improving relations a step further at an international Islamic summit in Istanbul starting today. President Mahmoud Ahmadinejad was warmly welcomed by his Turkish counterpart Abdulah Gul.

Turkey has recently defended Iran over its nuclear programme, which the West fears Tehran is using to develop atomic weapons. Ankara’s apparent efforts to strengthen links with Iran have alarmed the US and the EU, which Turkey wants to join.

And Brussels had been equally troubled by a decision to invite Sudan’s president to the Organisation of the Islamic Conference meeting.

The EU had urged the Turkish government to withdraw the invitation to war crimes suspect Omar Hassan al-Bashir.

But the Sudanese leader has pulled out of his own accord. Bashir is wanted over alleged war crimes in Sudan’s Darfur region.

Link to Article
Posted by Christopher Logan at 8:19 PM

Welcome to our Coach Outlet Store, 70% Off, Coach Purses, 2011 Coach Outlet Store Online and shopping, coach outlet store are proud to offer you the Best Designer Handbags. Our coach purses lasting quality, exquisite craft. Discount Handbags are perfect for young fashionable girls as well as mature traditional women. We believe this discount Coach Purses is what you want. It must be a wise choice for you to choose these Coach Handbags !

so many 2011 new porducts here,70% just for you!
winter boots
power balance bracelet

Thanks for sharing such an interesting post with us. You have made some valuable points which are very useful for all readers

Thank you for Cheapest wow goldexpressing this kind of exciting submit along with us. You cash in on several important points that are extremely helpful for allCheapest Diablo 3 gold visitors