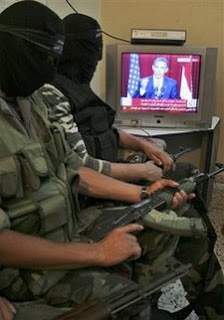 Mr. Obama talks about a 'new beginning between the United States and Muslims'. Do these men look like they want peace?

From the Palestinian militants from the Popular Resistance Committee wear masks to conceal their identities from the camera as they pose with their weapons while watching the televised speech of US President Barack Obama in front of journalists at a training base in Gaza City, Thursday, June 4, 2009. Quoting from the Quran for emphasis, President Barack Obama called for a 'new beginning between the United States and Muslims' Thursday and said together, they could confront violent extremism across the globe and advance the timeless search for peace in the Middle East.

Link to Article
Posted by Christopher Logan at 7:00 PM