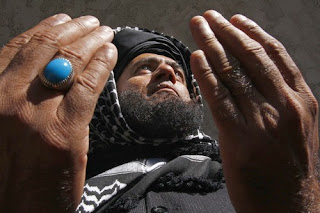 Near the end of 2007 the LAPD dropped its "Mapping Program" in the which they were going to monitor the local Muslim community. The program was dropped because Muslims said that they were "offended". Now the LAPD has fallen into the same trap as many other governmental departments have. Expecting a Muslim to be honest with them about Islam. This never works.

Police leaders hope that the new chaplain, who has a history of building bridges between Muslims and law enforcement, can help officers understand his community better.

By Duke Helfand
June 29, 2009
American Muslims have never been much of a presence in the Los Angeles Police Department, accounting for less than 1% of its nearly 10,000 officers.

But now, with department leaders eager to improve relationships with local Muslims, top brass have named the force's first Islamic chaplain: a Pakistani-born spiritual leader who has spent much of the last decade trying to build bridges between law enforcement and Los Angeles County's diverse Muslim communities.

Sheik Qazi Asad, 47, will serve as a reserve chaplain at the LAPD's North Hollywood station. The volunteer post requires about eight hours of service each month. But to Asad and his LAPD patrons, it represents an opportunity to expose officers to a culture and faith that many may find unfamiliar, even foreign.

And that, Asad and LAPD leaders hope, will enhance relations that have been strained at times, particularly in the aftermath of a much-criticized plan by the department in 2007 to map the city's Muslim population. The plan, which some critics equated to religious profiling, was scrapped after a week of protests.

"We need to establish very good communication . . . where both parties are talking to each other," Asad said. "This is just opening up the door."

Asad arrived in the United States at age 24, with virtually no money and speaking very little English. He learned to speak the language by taking classes at Los Angeles City College and by watching the news on television. And he learned a profession, the insurance claims business. Meanwhile, he began serving informally as a religious advisor to other Muslims -- presiding over weddings and funerals, heading a nonprofit organization whose members prepare the dead for burial, conducting weekly spiritual classes at a storefront office space in Inglewood.

He got involved with law enforcement after the Sept. 11, 2001, attacks.

Los Angeles County Sheriff Lee Baca asked Asad to join a news conference at which Baca and other elected leaders demonstrated their solidarity with the embattled Muslim community. Baca had met Asad in the 1990s at dinners with elected officials and community leaders in the South Bay, where Asad lives.

The bearded Asad, a U.S. citizen, came to the news conference wearing traditional Muslim attire -- a turban, long collarless shirt and trousers ending above the ankle. Soon after, he was asked to join Baca's Executive Clergy Council. He brought about a dozen other American Muslim leaders with him.

Baca said that Asad helps establish a bridge of trust between Muslims and police. "It doesn't surprise me that the LAPD would reach out to Qazi and give him a chance to continue his work," the sheriff said.

About two years ago, Asad joined an advisory panel for the U.S. Department of Homeland Security that included representatives from the immigration service, Border Patrol, FBI, L.A. County Sheriff's Department and LAPD. That's where he and LAPD leaders first talked about Asad becoming involved with the force.

Like other candidates, Asad underwent an extensive background check that included fingerprinting, a review of his finances and employment history, and an interview with the department's senior chaplains.

LAPD leaders view Asad's chaplaincy work as an extension of his previous roles with law enforcement. Although chaplains are expected to serve in a nonsectarian capacity, LAPD authorities said they believe that Asad could be a source of information for officers curious about Muslims and their religion.

"Officers don't know about Islam or Muslim communities in Los Angeles. He's going to be a person who can educate them to that," said Lt. Mark Stainbrook, who oversees community outreach for the department's counter-terrorism and criminal intelligence bureau.

Some Muslim religious and civic leaders who belong to an LAPD Muslim advisory panel grumbled privately about not being consulted about Asad's selection, although they did not take issue with him. LAPD officials said that Asad applied for the post on his own, and that the department generally does not run chaplain appointments by outside advisory groups.

Even those Muslim leaders who voiced some disappointment with the process, however, said they believed that Asad's appointment would help nurture an emerging relationship with the Police Department.

"The position needs someone who has the basic knowledge and skills to bring people together, especially someone who understands the culture and nature of law enforcement," said Hussam Ayloush, Southern California executive director of the Council on American-Islamic Relations. "I think Mr. Asad has such abilities."

Asad will spend the next six months working under two senior chaplains in the North Hollywood station.

Asad said he intends to wear traditional clothing when appropriate -- for example, when presiding at the funeral of a fellow Muslim. But he expects to show up most often in suit and tie.

He acknowledged that officers may be surprised to see him in their station.

"It will take time for them to adjust," he said. "I have to earn my stripes."

Link to Article
Posted by Christopher Logan at 4:18 PM