"The Humor of Islam....You'll Die Laughing" 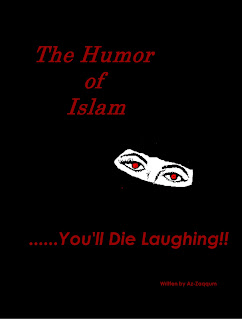 Usually when we read about Islam it is nothing but bad news. We constantly read about violence stemming from the Islamic world or Muslims trying to impose Islam on non-Muslims. Today I would like to lighten it up a bit and share some funny excerpts from a new book entitled "The Humor of Islam....You'll Die Laughing". Written by Az Zaqqum.

The title is a twist on Sharia law that forbids laughing too much. Most all Muslims believe Sharia law are the best laws created. They also believe in talking lamp chops, but you decide.

I am Az Zaqqum, the Arab version of Ann Coulter.

Loosely translated from Arabic, my name means; Bitter tree from hell. Quite fitting as all Muslims know the Hadith of why hell will be filled mostly with women, but, Allah did not put me in hell, it was the mad Mullahs in bad dresses.

Critics of Islam often are accused of taking the Quran or Hadith out of context. What I’d like to know is, why don’t they get upset when Muslims do the same? Allah doth not like-ith the Hypocrites. Says so in the Quran.

In Saudi Arabia, the Muslim men believe western women have too much freedom and not enough clothing. But, voting while naked isn’t the issue. If Muslim women were allowed the same rights as Muhammad’s first wife, Khadija, Islam would probably have not been so popular.

There are a lot of books on Islam today, probably more than in the entire history of Islam. But nothing on the humor of Islam....till now.

Aisha recalled:
A verse that prescribed the death penalty for adulterers was written on a palm leaf that was in her home following Muhammad’s death. Unfortunately, a goat wandered into the house and ate the leaf before it could be collected into the Quran.
What happened to the goat?


Narrated Salim’s father;
Once Gabriel promised to visit the Prophet but he delayed and the Prophet got worried about that. At last he came out and found Gabriel and complained to him of his grief for his delay. Gabriel said, “We do not enter a place in which there is a picture or a dog.”
I guess a picture of a dog would be out of the question. 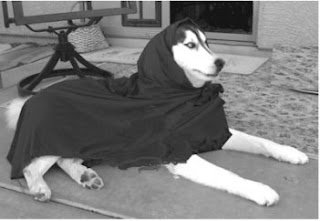 Al-Bukhari;
The Prophet, told Muslims to go out behind camels and drink their urine in treatment of illness.
This would probably prevent a lot of people from calling in sick.

Sahih Moslem;
Burda narrated that his father said the messenger of God said; “Every time a Muslim man dies, God puts in hell fire a Jew or a Christian.”
Ah, so that’s why Muslims kill each other.

Muhammad ‘Ala al-Din Haskafi; 17th Century Hanafi Jurist, al-Durr al-Mukhtar says….And if a man wants to take concubine and his wife says to him, ‘I will kill myself’, he is not prohibited from doing so, because it is a lawful act. But, if he abstains to save her grief, he will be rewarded.
Ah, that’s nice. But, she probably still wants to kill herself.

The Prophet said, “If a man Invites his wife to sleep with him and she refuses to come to him, then the angels send their curses on her till morning.”
I’d bring in the dog. Angels don’t come into house where there’s dog.

Narrated ‘Abbas bin Tamim;
My uncle asked Allah’s Apostle about a person who imagined to have passed wind during the prayer. Allah’ Apostle replied: “He should not leave his prayers unless he hears sound or smells something.”
What if the guy behind him hears or smells something?

If anyone would like to purchase this hilarious new book they can do so here.
Posted by Christopher Logan at 8:51 AM