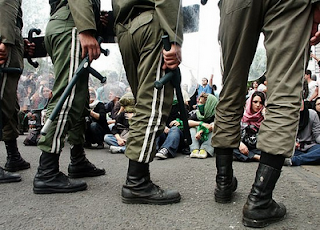 In the wake of the "fair" Iranian elections, the protests continue and are getting more violent. How long will it be before the Mullahs take the gloves off?

Hat tip on the photo to Babbazees Brain.

One person is thought to have been killed in Tehran after clashes erupted at a mass rally in support of Mir Hossein Mousavi, the defeated presidential candidate.

Hours after the rally began on Monday, reports said that armed men had opened fire on some of the protesters who had gathered in the Iranian capital in defiance of a ban imposed by the interior ministry.

An Associated Press photographer in Tehran's Azadi Square was reported as saying one person had been shot dead and several others appeared to be seriously wounded.

The incident occurred in front of a local base of the Basij, Iran's volunteer paramilitary force, which had been set ablaze.

"There has been sporadic shooting out there ... I can see people running here," a reporter of Iran's English-language Press TV said in a live call from Tehran's Azadi Square.

Link to Article
Posted by Christopher Logan at 11:03 AM