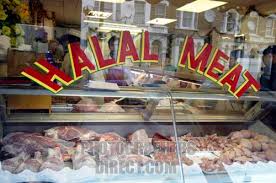 With all the problems that the Islamic community is causing in the UK like violent acts, preaching for sharia law with no regard for the UK laws, the UK government continues to bend over backwards to cater to Islam.

Now they have announced that they will be bringing in 5,000 Muslim butchers from Pakistan in an agreement called the Memorandum of Understanding between the National Halal Foods Group and the Overseas Employment Cooperation of Pakistan. Does the UK government realize that they are slowly destroying their country or do they just not care?

5,000 Pak butchers to get jobs in UK
By Asif Mehmood
LONDON - Over 5,000 butchers from Pakistan would get employment in the halal meat industry of UK through Memorandum of Understanding (MoU) signed between National Halal Foods Group (NHFG) of UK and Overseas Employment Cooperation of Pakistan. The MoU has been signed here at the Pakistan High Commission, London Friday.

Speaking on the occasion Pakistan ‘s High Commissioner to UK Wajid Shamsul Hasan said that through the efforts of National Halal Foods Group (NHFG), opening of outlets of halal meat in leading supermarkets of UK and Europe, will provide employment opportunities for Pakistani butchers along with export of meat from Pakistan to the international market of halal meat. The signing of Memorandum of Understanding between the UK based National Halal Foods Group (NHFG) and Overseas Employment Cooperation of Pakistan’s Ministry of Labour Manpower and Overseas Pakistanis took place at the Pakistan High Commission London.The MoU was signed by Community Welfare Councillor of Pakistan High Commission Muhammad Talha Saeed and Chief Executive Officer of NHFG Muhammad Zahid Yaqoob.

Expressing his views Zahid Yaqoob said as a result of this MoU over 5000 butchers from Pakistan will be given employment in the UK for producing halal meat for the outlets in UK’s leading chains of supermarkets including ASDA and TESCO. He further said that there was a market of $50b of halal meat in which Pakistan can obtain its share by producing halal meat of international standards.

Link to Article
Posted by Christopher Logan at 7:46 AM

The people of the UK need to start some peaceful protests against the catering to Islam and mass immigration which is overrunning the UK.

"people get arrested if they peacefully protest in the UK"

Do you have difficulty in understanding ?

Which part of I am going to post what is happening there whether you like it or not do you not understand?

You are the only Brit who has said that nothing can be done.

People can find ways to campaign for a political party that will take a stand for "Britishness".

The group ex-Muslims of Britain has protested the sharia courts. They have not been arrested. Petitions can be signed, talk radio shows can be called.

Excuses do not solve the problem.

The BNP were arrested for handing out fliers.

Really helpful data, lots of thanks for your post.