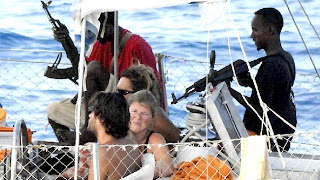 The Somalian Islamic pirates have vowed revenge on Americans and the French, for killing five of their thug brothers in daring rescues last week. One "moderate" Muslim leader has said that the killings of the pirates would only escalate piracy. Which in reality means that he supports the pirates and is just trying to come off as a moderate.

The latest raid by US forces this morning saved American hostage Capt Richard Phillips. Three pirates were killed and one was taken captive, the US Navy said.

That rescue mission and one by France last week have upped the stakes in shipping lanes off the anarchic Horn of Africa nation where pirate gangs have defied foreign naval patrols.

"The French and the Americans will regret starting this killing. We do not kill, but take only ransom. We shall do something to anyone we see as French or American from now," Hussein, a pirate, told Reuters by satellite phone.

"We cannot know how or whether our friends on the lifeboat died, but this will not stop us from hijacking," he said.

Sea gangs generally treat their captives well, hoping to fetch top dollar in ransoms. The worst violence has been an occasional beating.

"We shall revenge," said another pirate, Aden, in Eyl village, a pirate lair on Somalia's eastern coast.

Some fear the US and French operations may make the modern-day pirates more like those of previous centuries.

"The pirates will know from now that anything can happen. The French are doing this, the Americans are doing it. Things will be more violent from now on," said Andrew Mwangura of the Kenya-based East African Seafarers Assistance Program.

"This is a big wake-up to the pirates. It raises the stakes."

Piracy is lucrative business in Somalia, where gangs have earned millions of dollars in ransoms, splashing it on wives, houses, cars and fancy goods.

After a wane in business early this year, pirates have struck back. They presently hold more than a dozen vessels with about 260 hostages, of whom about 100 are Filipino.

Eyl, Haradheere and other pirate havens along the Indian Ocean coastline have come back to life with the windfall of successful operations.

Somalia's anarchy - whose 18 years of civil war have given sea gangs assault rifles, grenade launchers and little central control - has long been ignored by world powers.

The saga over the capture of Capt Phillips has thrown international attention on the long-running piracy phenomenon that has hiked up insurance costs on strategic waterways where warships now patrol.

Link to Article
Posted by Christopher Logan at 8:44 AM

I think the escalation will not be in piracy, but in the numbers of dead pirates and the eventual extinction of piracy in that area. Obama is already making the first moves that will wipe these barbaric pukes off the planet.

Obama had 18 meetings about this in 4 days. The only time he took action was when the Captain who was held hostage jumped ship. Then and only then were the SEAL's given orders by the Naval captain to open fire.
I don't think Obama ever gave orders to take the hostages at all. It is just being spun now so he looks good.

If you look at the incident as a whole, you can tell Obama could not make a decision on this at all.