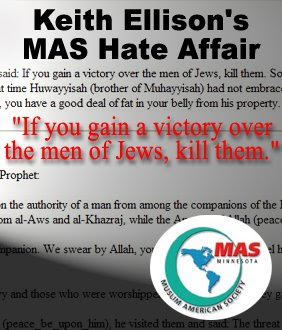 US Islamist Congressman Keith Ellison was arrested as he was protesting for aid groups to be allowed into Darfur to help his Muslim brothers. He was asked to leave and would not, subsequently he was arrested. Would Mr.Ellison of showed so much passion if it were not Muslims involved? I doubt it.

Rep. Ellison arrested during Darfur protest
By BOB VON STERNBERG, Star Tribune
U.S. Rep. Keith Ellison, D-Minn., and four other members of Congress were arrested this morning in front of the Sudanese Embassy in Washington, D.C., as they protested the expulsion of aid groups in Darfur.

It was an apparently unprecedented act by a member of Minnesota's congressional delegation and somewhat out of character for Ellison, who has kept a generally low profile since he arrived in Congress, attracting international attention as its first Muslim member.

News archives show that no other members of the state's delegation have been arrested for civil disobedience; former Sen. Dave Durenberger was arrested on disorderly conduct charges in 1986 after he argued with a police officer and a taxi dispatcher. The charges were dismissed.

Before being led away in handcuffs during the mid-morning protest, Ellison said it's wrong to deprive aid to what he called "the most vulnerable people on our planet."

"They were speaking on the embassy steps and were asked to leave," said Ellison spokesman Rick Jauret. "When they didn't, they were arrested."

Ellison and a total of seven other protesters were taken away by U.S. Secret Service agents and are expected to be charged with trespassing, Jauert said.

The activists are urging world leaders to take a stand against Sudanese President Omar al-Bashir's decision to expel 16 aid agencies from Darfur.

The United Nations says up to 300,000 people have died in Darfur, where ethnic African rebel groups have been fighting the Arab-dominated national government for six years.

According to the advocates, the Sudanese government's decision to expel 13 international aid agencies will leave approximately 1.1 million civilians without food aid, 1.5 million without health care and more than 1 million without potable water

Since 2007, early in his congressional tenure, Ellison has tried to make conditions in Darfur a major legislative priority. He is a member of Amnesty International USA's, Save Darfur Coalition.

In prepared remarks he delivered at the embassy, Ellison said he situation Darfur "remains dire and the humanitarian situation has worsened since the March 4 expulsion of aid agencies."

He added, "we implore all countries to demand that the Government of Sudan respect and protect human rights and put an end to the acts of atrocities and crimes against humanity in Darfur."

Link to Article
Posted by Christopher Logan at 9:49 AM

What a freak he is.

The Muslims who are being killed are the Sufis, whose doctrines are among the most peaceful of all in Islam.

Addtionally, they are black.

And, they are being killed systematically at the behest of the Arab government which rules the black people of Sudan.

And most likely, triply hypocritical, because I doubt he cares at all.

I think think this was just a publicity stunt.

If he really cared, he would protest against the OIC for their continuing support of the government of Sudan.

Hi Pastorius,
I doubt very much that he will ever speak out against the OIC. Ellison also recently gave a speech at a Sharia college.

Well crap, what do you respect, a "black muz" from the ghetto showing love for his black bros. Good for his constituency to know that he disrespects the hated whitey just like they been told to do too. Cause, you know bro, it be whitey fault!

Seems Minnesota is becoming a hotbed of liberals and terrorists.
But they won't be labeled as such because they don't believe in the constitution for all.