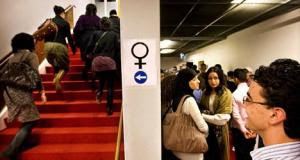 Usually we see Europe's greatest leader Geert Wilders speaking out against the problems that Islam brings to the West. Today another Dutch politician has come out against the Islamic based gender segregation at a Rotterdam theatre. It is refreshing to see more European politicans speaking up.

The theatre said the new policy should bring religious Muslim women to the Dutch theatre who would otherwise not to do so to avoid sitting next to a man.

Minister Van der Laan said the theatre's policy contradicts equal rights legislation.
The Rotterdam city council, which is one of the sponsors of the theatre, had not protested against the new policy.

Separate facilities to accomodate the needs of religious Muslim women are not a novelty in the Netherlands.

Link to Article
Posted by Christopher Logan at 7:43 AM