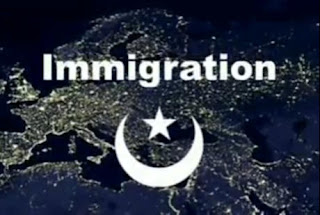 As pointed out in the Muslim demographics video, and the Netherlands warning to the world video, Muslims are flooding into non-Islamic countries. If their immigration is not stopped or severely slowed down, Islam will dominate the world. It is that simple.

The global Muslim population stands at 1.57 billion, meaning that nearly 1 in 4 people in the world practice Islam, according to a report Wednesday billed as the most comprehensive of its kind.

The Pew Forum on Religion and Public Life report provides a precise number for a population whose size has long has been subject to guesswork, with estimates ranging anywhere from 1 billion to 1.8 billion.

"This whole idea that Muslims are Arabs and Arabs are Muslims is really just obliterated by this report," said Amaney Jamal, an assistant professor of politics at Princeton University who reviewed an advance copy.

Pew officials call the report the most thorough on the size and distribution of adherents of the world's second largest religion behind Christianity, which has an estimated 2.1 billion to 2.2 billion followers.

The arduous task of determining the Muslim populations in 232 countries and territories involved analyzing census reports, demographic studies and general population surveys, the report says. In cases where the data was a few years old, researchers projected 2009 numbers.

As a result, the Shiite numbers are not as precise; the report estimates that Shiites represent between 10 and 13 percent of the Muslim population, in line with or slightly lower than other studies. As much as 80 percent of the world's Shiite population lives in four countries: Iran, Pakistan, India and Iraq.

The report provides further evidence that while the heart of Islam might beat in the Middle East, its greatest numbers lie in Asia: More than 60 percent of the world's Muslims live in Asia.

While those population trends are well established, the large numbers of Muslims who live as minorities in countries aren't as scrutinized. The report identified about 317 million Muslims — or one-fifth of the world's Muslim population — living in countries where Islam is not the majority religion.

In several of these countries — from India to Nigeria and China to France — divisions featuring a volatile mix of religion, class and politics have contributed to tension and bloodshed among groups.

The immense size of majority-Hindu India is underscored by the fact that it boasts the third-largest Muslim population of any nation — yet Muslims account for just 13 percent of India's population.

"Most people think of the Muslim world being Muslims living mostly in Muslim-majority countries," Grim said. "But with India ... that sort of turns that on its head a bit."

Among the report's other highlights:

_ Two-thirds of all Muslims live in 10 countries. Six are in Asia (Indonesia, Pakistan, India, Bangladesh, Iran and Turkey), three are in North Africa (Egypt, Algeria and Morocco) and one is in sub-Saharan Africa (Nigeria).

_ Indonesia, which has a tradition of a more tolerant Islam, has the world's largest Muslim population (203 million, or 13 percent of the world's total). Religious extremists have been involved in several high-profile bombings there in recent years.

_ In China, the highest concentrations of Muslims were in western provinces. The country experienced its worst outbreak of ethnic violence in decades when rioting broke out this summer between minority Muslim Uighurs and majority Han Chinese.

_ Europe is home to about 38 million Muslims, or about five percent of its population. Germany appears to have more than 4 million Muslims — almost as many as North and South America combined. In France, where tensions have run high over an influx of Muslim immigrant laborers, the overall numbers were lower but a larger percentage of the population is Muslim.

_ Of roughly 4.6 million Muslims in the Americas, more than half live in the United States although they only make up 0.8 percent of the population there. About 700,000 people in Canada are Muslim, or about 2 percent of the total population.

A future Pew Forum project, scheduled to be released in 2010, will build on the report's data to estimate growth rates among Muslim populations and project future trends.

A similar study on global Christianity is planned to begin next year.

Link to Article
Posted by Christopher Logan at 9:32 PM